Al-Sahaf working on a book 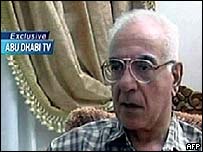 The former Iraqi information minister, Mohammed Saeed al-Sahhaf, has been interviewed for the first time after the war, by Al-Arabiya and Abu Dhabi TV. He declined to comment on many details, but revealed he is working on a book.

A spokeswoman for US Central Command said “He is an interesting story teller and we look forward to hearing what he has got to say.”